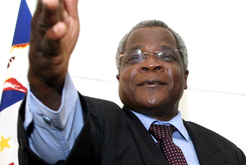 Having talked on the telephone last night with President Filipe Nyusi, Renamo head Afonso Dhlakama announced this morning that the temporary cease fire had been extended for two months, to 4 March 2017.

In a press conference last night (Monday 2 Jan) after the telephone call, Nyusi said the cease fire had been positive, and that Dhlakama told him that "there had been no government attacks".

But in his telephone press conference at 9 am local time this morning (3 Jan), Dhlakama said there has been some violations by the government of the one week new year cease fire.

In his press conference, Dhlakama said he had received assurances from Nyusi that defence and security forces would stop attacks on Renamo, and this includes groups that carry out attacks and kidnappings of Renamo members and delegates at district and provincial levels. (AIM Pt 3 Jan)

Dhlakama stressed that the political dialogue must continue in the presence of international mediators. And he said that the Government and Renamo will appoint experts to the subcommittee drafting the proposal for a law on decentralization to be submitted to parliament. O Pais today (3 Jan), in an article written before the Dhlakama press conference, said the extension was to allow parliament to debate the decentralisation proposal.

Assassination. Jose Naitele, a senior Renamo official in Nampula and former MP, was murdered outside his home in Nampula city on 29 December on the second day of the cease fire. Gunmen opened fire on his car, which was hit by more than ten bullets. Naitele's widow told reporters that her husband had been facing threats. "Yesterday he told me he was being followed, and no longer felt safe", she said. (AIM En 30 Dec)

After a long period with no contact, two direct telephone conversations between Nyusi and Dhlakama are clearly a positive step. They have resulted in a temporary cease fire and will revitalise the stalled negotiations; the mediators gave up and went home last month. Dhlakama has taken the initiative to make the phone calls and call the cease fire, probably as a way of responding to the divisions within Frelimo which have paralysed the talks.

Frelimo seems so divided that it is extremely difficult to agree a negotiating position - a position that applies to the debt as well as the war. From the start, some in Frelimo wanted to defeat Renamo militarily and opposed serious negotiations. Then there was opposition to the international mediators demanded by Renamo.

There has been a decades-long struggle over how much power to decentralize to municipalities and this carries over into the negotiations, with strong opposition to elected governors and to any formalisation of decentralization that would give power to governors not named by a Frelimo president.

Renamo has underlined that the priority issue of the negotiations is to agree a decentralisation proposal to be put to parliament. In November Frelimo proposed an expert subcommittee of the joint negotiating commission to draft a proposal for parliament. Renamo objected on two grounds - that the commission excluded the mediators, and that the government negotiators had no authority to make concessions because of the sharp divisions within Frelimo.

Dhlakama appears to have now agreed to the expert committee, but also demanded the return of the mediators - he has always seen the mediators as a protection against being tricked by Frelimo. And Dhlakama has set an effective deadline - the negotiators need to agree something to go to parliament within the next two months.

This is not straightforward for two reasons. First is the divisions within Frelimo, noted above. But second is that in negotiations, Dhlakama has taken an all-or-nothing stand, and has rarely been prepared to compromise. In this case, he wants Renamo governors in six provinces and he expects them to have substantial power. Will he accept a lesser form of decentralization that would ensure at least some Renamo governors? But until Frelimo agrees a negotiating position, it cannot put Renamo on the spot.

Meanwhile, Nyusi has been careful not to declare any form of cease fire on the government side. For each cease fire, Nyusi announced after a telephone conversation that Dhlakama would make an important announcement the next day. This suggests Nyusi could not gain internal Frelimo agreement for a formal cease fire. But it also reflects a political point - the government claims that it is only Renamo which is waging war and therefore solely for Renamo to stop shooting.

The assassination plus statements by the police (who are largely fighting the war) that patrols and convoys would continue suggest some opposition to the cease fire. It appears that Nyusi has enough power to curb government military actions, but not enough to say so publicly.

Mozambique's main business association, the Confederation of Economic Associations (CTA), in a statement issued Friday (Lusa 30 Dec), said the war was hurting business and called on Nyusi to take a direct and personal lead in the negotiations.

Dhlakama has taken the initiative, and it is for Nyusi to respond. But much more is required from both sides. For there to be an agreed proposal for the next parliament session, there will be a month of hard negotiations in the expert subcommittee, which will require flexibility on both sides. Until now, flexibility has been in short supply.